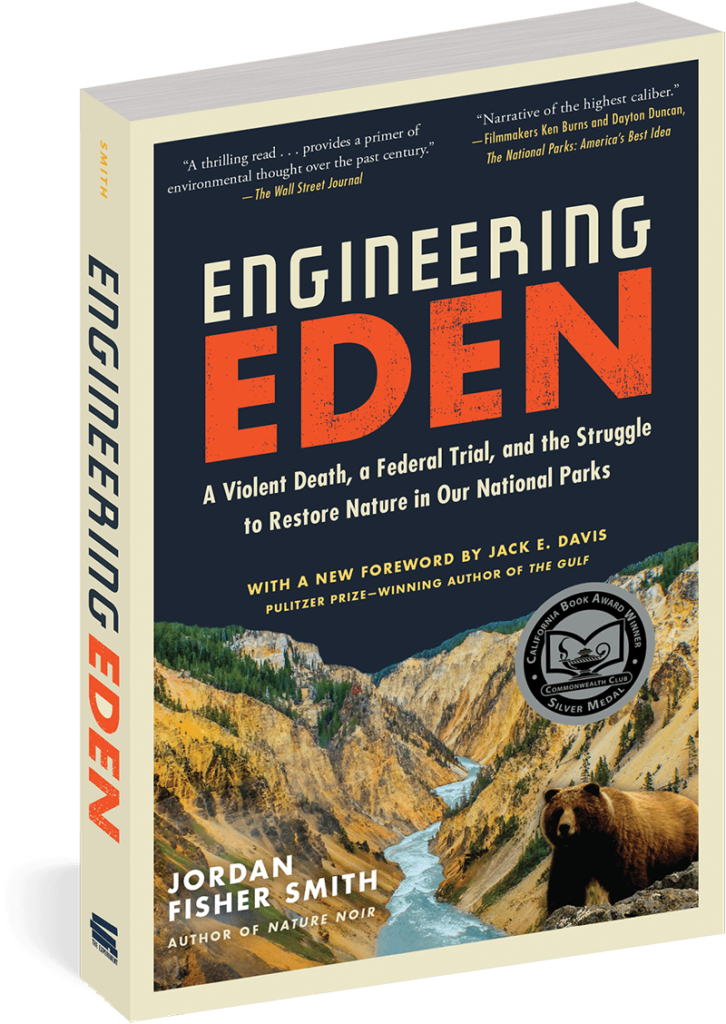 In the summer of 1972 Harry Eugene Walker hitchhiked away from his Alabama home to see America. Nineteen days later he was killed and partially eaten by an endangered grizzly bear at Yellowstone National Park. An environmental activist convinced Harry’s parents—simple dairy farmers who’d never as much as contested a traffic ticket—to sue the Department of Interior for alleged mismanagement of the grizzly that not only caused their son’s death, but threatened to drive the great bear to extinction in the 48 contiguous United States. When the case went to trial in 1975, two of the greatest wildlife biologists of the twentieth century testified against each other in what became a referendum on some of the most fundamental issues we face today in conserving wild places:  When nature has been disrupted by human beings, how do we go about repairing it? How much should we try to control or manipulate it in order to heal it? And, what happens when we get it wrong?

“Jordan Fisher Smith traces the evolving tension at the heart of the national park idea: should parks be left untouched or managed for people’s enjoyment? This is story-telling and historical narrative of the highest caliber—clear and compelling, a courtroom drama with unforgettable characters and a contemplation of our relationship with wild nature.”
—Ken Burns and Dayton Duncan
The National Parks: America’s Best Idea

“Seduces the reader with a public lands parable masquerading as a wildly entertaining thriller.”
—Outside (read review)

“Ambitious, persuasive, and nuanced…Smith will impress readers with scientific rigor and real suspense as he weaves together the histories of modern ecology, the National Park Service, and the ever-evolving relationship between humans and nature.”
—Publishers Weekly (read review)

“An intensely reported, rousingly readable and ambitiously envisioned book…Like the best visions for the parks, it combines the human and the animal, the managed and the natural, the controlled and the wild.”
—The Wall Street Journal (read review)

“Timely and thoughtful…A vivid account of conflicts within the National Park Service over managing bears and other wild animals — conflicts that contributed to tragic results… Smith’s book will draw you in with his passion, thoughtfulness and first-rate story telling.”
—Seattle Times (read review)

“Jordan Fisher Smith brilliantly excavates an underlying debate that still plays out among wildlife managers: Should agencies manipulate wildlife and vegetation, choosing between species in wilderness—or should they do their best not to intervene, and let nature decide?”
—High Country News (read review)

“Jordan Fisher Smith paints an epic picture of national park management and the scientists—in some cases, families of them—and their bodies of work, and those of their protégées, that led to the creation and evolution of policy and the effective practices that continue today over vast landscapes.”
—Jerry Mitchell, George Wright Forum (read review)Mitchell is former national chief of the Biological Resource Management Division of the National Park Service

“ENGINEERING EDEN tackles the issue of managing wildness [through the lens of a 1972] grizzly bear attack in Yellowstone National Park. Wildlands management today faces the same divide…Would-be stewards of wildlands need to decide how untrammeled we want those lands to be. Smith’s thoughtful, erudite work could help them make the right choice.”
—Sierra (read review)

“Smith’s fervent investigation into bear attacks in Yellowstone…is a dramatic, eye-opening chronicle of the struggle to preserve wilderness while making it accessible to the public…A galvanizing storyteller fluent in the conflict between environmental science and politics, Smith brings every player into sharp and indelible focus as he illuminates the urgent issues national parks grapple with as they struggle to wisely manage predators, invasive species, wildfires, and people.”
—Booklist

“Smith has pulled off an amazing feat: he’s made wildlife management urgent and engrossing, writing about it with clarity, depth and a storyteller’s pacing…an outstanding introduction to ecological decision-making”
—Shelf Awareness for Readers

“[A] painstakingly researched…vindication of the Craigheads, who were driven out of Yellowstone…because they refused not to speak out against the Park Service.”
—National Parks Traveler

“Engineering Eden is a fascinating book about the relationship between humankind and nature. Jordan Fisher Smith illuminates the often embittered arguments what our role in wilderness should be, and has written a vivid historical account that sheds light on our place in nature’s complex web of life.”
—Andrea Wulf, author of The Invention of Nature

“A searching study of a tragedy and the legal contest that followed it, one that shaped the course of national park policy in the modern age. Excellent reading…”
—Kirkus Reviews

“This meticulously investigated history of Yellowstone and its wildlife management problems should appeal to fans of Jack Olsen’s classic Night of the Grizzlies.”
—Library Journal

“This is a big, ambitious book about a seemingly small, if horrific event—a grizzly devouring a young man. And Jordan Fisher Smith has succeeded in his ambition. He produced a wonderful book…Smith uses that horror as a narrative focal point to explore science, policy making, bureaucracy, ego, even the law, and when he explores something he goes deep.”
—John M. Barry, author of Rising Tide and The Great Influenza

“What is ‘nature’? In a narrative delivered with elegance and vigor, Jordan Fisher Smith shows that our answers to this question have life-and-death consequences, for humans and for the ecosystems in which we live.”
—David George Haskell, author of The Forest Unseen

“A probing look at efforts to manage the “wild” in our fading wilderness—and at the trouble resulting when our guesses are wrong. Engineering Eden is especially timely as we consider our responsibilities to nature on this fast-warming planet.”
—Tom Kizzia, author of Pilgrim’s Wilderness

“Jordan Fisher Smith’s grasp of the science involved in national park and wilderness management is impressive. So is his ability to tell a compelling story in the tradition of John McPhee and Jon Krakauer. The result is a classic, the literary history of America’s relationship to the natural world.”
— Roderick Nash, author of Wilderness and the American Mind

With open mind and deft narrative, Jordan Fisher Smith probes what is an intractable challenge to environmental stewardship.”
—Kevin Starr, author of California and Golden Dreams

“Jordan Fisher Smith’s gripping narrative about the death of a camper mauled by a grizzly, and the trial that follows, poses compelling questions about how to preserve wild nature. Highly recommended.”
—Gerald Haslam, author of In Thought and Action and Workin’ Man’s Blues